Posted on April 12, 2019 by brightonhovelibraries

Once a month at Jubilee Library, there’s a free music talk – everyone is welcome! Francis, one of the members of library staff who runs the music club, gave April’s talk and in case you missed it:

Steve Miller rocking out in the 70’s

As a fan of funk, disco, reggae, punk and psychedelic rock this is genre of music that takes in influences of all of these and also affected all of them too.

Late 60’s, 70’s, early 80’s were all particular times when people experimented a lot with music and took influences from a wide range of places.

Also it seems record companies let them do it as I suspect they didn’t quite understand this unusual new music but as people were buying it, didn’t mess with the people making it. As the decades progressed record labels regrouped and restricted the freedoms of these bands. Could you imagine Thirteenth Floor Elevators putting out a psych album in 1975 or The Specials “Ghost Town” coming out in 1985?

60’s and 70’s soul funk was more influenced by psychedelic rock whereas dub disco was from dub reggae, though I’m sure there were people the late 70’s/early 80’s music scene that were involved in psychedelic rock, for example both Stewart Copeland and Andy Summers from The Police had been in psychedelic rock bands, Frolk Haven and Dantalian’s Chariot. The Police released a classic dub disco epic “Voices inside my head” in 1980.

In Don Lett’s “Tales of Doctor Funkenstein” documentary George Clinton, the founder and inspiration between Funkadelic and Parliament said that in the 60’s black people listened to rock music and the album that really affected and influenced him was The Beatles Sgt Pepper. It is noticeable after 1967 how trippy sounds drifted across the soul world, especially to Motown.

One of my favourite and I think most talented song writers and producers ever was Norman Whitfield, he’d go to Funkadelic gigs and get his house band the Funk brothers to play a version of what he heard on his groups, especially The Temptations, Undisputed Truth and white funky crossover band the Rare Earth. His lyrics were more outspoken politically than Marvin Gay’s “What’s going on” and the sound of the last two bands really trippy and heavy on the fuzz and wah wah guitars, something I love!

Bands such as Gong on their epic 1974 “You” album brought jazz-funk and space rock together, Canterbury’s Caravan on 1972’s “Waterloo Lily” combined some very spacy fuzz keyboards with funky rhythms and also German bands Agitation Free had moments of spacey psych rock on their albums released between 1972 and 1976. Not forgetting the legends of this area Can, their 1978 track Aspectacle is my favourite example.

I’ve chosen to play more of a psychedelic soul than funk track called “Fantasy is Reality” by Parliament and recorded in 1970 but never released. Not sure why it wasn’t released as it is brilliant!

There was a run of spacey disco records around 1977 following the mega success of Star Wars , Meco did an album of Star Wars music and Space released “Magic Fly” these had a spacey and trippy edge but were also a tad cheesy too. Kool & the Gang released the much better “The Force”in 1978 and Instant Funk had “Dark Vader”in 1979, again a quality track.

Also to remember is some pretty groovy reggae tracks came out which whilst not being dubby, did add the disco element, Bob Marley’s “Could you be loved” is a great example.

An amazing record that came out in 1976 is often talked about as one of the first dub disco records, it the aptly titled Disco Dub Band’s cover of “For the Love of Money”.

It was the inspiration of music exec and songwriter Davitt Sigerson, who made two records in the 80’s on legendary left field New York Ze Records. Recorded in the basement of Beanstalk Music in Camden and by legendary funky reggae artist Mike Dorane. Also check out his tracks Penguin Funk and The Ghetto. 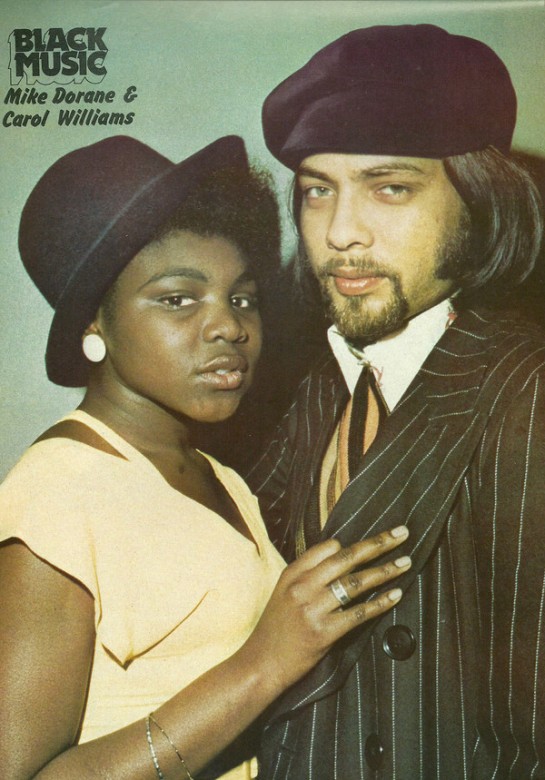 Though the 70’s music came out that would fit the dub disco description, but it is mainly in the early 80’s that the majority of music that fits into this style can be found.

Again the big difference to me is that the early 70’s dance music was more influenced by psychedelic rock and the late 70’s/early 80’s by dub reggae.

The next track I’m going to play came out in 1976 but really set the scene for the sound of dub disco.

There were many mixmasters responsible for great dub disco mixes across disco, rock and funk especially, to me three stand out as real leaders, Francois Kervorkian, Larry Levan and Paul Simpson.

We’ll also need to mention David Mancuso who had a club in his own loft apartment aptly called “The Loft”, he influenced a lot of these guys in that he played long trippy and often less commercial and more serious records such as Dexter Wansell “Life on Mars” and War’s “City Country City”.

Another very influential record, or I would say probably “the record” was Funk Masters “Love Money”.

Recorded by South Londoner Tony Williams, a 70’s soul and funk DJ and reggae presenter on BBC Radio London in the 70’s and 80’s. He didn’t release a lot of records but what he did were a brilliant mix of dub reggae, disco-funk and early rap. “Love Money”

The record was very influential on the New York disco scene and especially to the king of disco dub mixes Francois Kervorkian. He said of it;

“I hadn’t been exposed to King Tubby’s early stuff at the time. But when I heard a dance music thing with all those big reverbs, those stops, those crazy effects where a piano comes in, cuts off and decays. To me, that was a revelation. “Oh, you can do that?” I immediately I started searching out those sounds. I started searching out records that had that in it. Then I started going in the studio and playing with tape delays and all kinds of crazy regeneration effects.”

Originally released in 1980, a few copies made it to Vinylmania record store, very near to the Paradise Garage where Larry Levan deejayed. It was 1981’s heavy dub mix on Champagne records that really took off.

As we heard from Francois K earlier he got into the spacey sounds from the dub reggae he was hearing and really applied the sounds to a lot of his mixes on New York’s Prelude Records. D Train being a band he did a lot of great work for, my favourite track is Michael Wilson “Groove it to your body”, where there is a very funky and trippy B Side instrumental.

Michael Wilson – Groove it to your body

Francois K said Larry Levan got into the world of dance and dub a bit later when he started mixing dance tracks for Gwen Guthrie and Grace Jones. These had funk reggae legends Sly and Robbie as the rhythm section. The song “Seventh Heaven” is from a special remix album of Gwen’s that Larry mixed in 1983.

Larry Levan on the decks

Paul Simpson put out some great tracks under different act names in the 80’s, Paul Simpson Connection, Serious Intention, Pushe, Subject and Paradise Girls. He really went in for the dub mixes and brought more synth sounds in though keeping a definite foot in early 80’s boogie disco.

For vinyl fans, check out the B Sides and instrumentals.

Subject – The magic the Moment

Noel Williams was a Miami based producer and musician, coming from a reggae background ne co-wrote “Buffalo Soldier” with Bob Marley & the Wailers. He released records under his own name of King Sporty and his music moved from reggae, to funk and then to disco. He’s responsible for a lot of good music released on via his Konduko and Tambasha labels, Connie Case “Get on Down” being a classic, the other legendary release and dub disco classic is The Ex Tra’s “Haven’t been funked enough”. 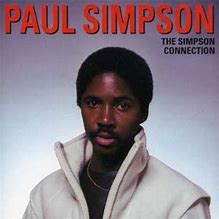 Paul Simpson in the early 80’s

This was a very influential record and I think especially popular in the underground New York clubs and also with Manchester DJ legend Greg Wilson. Check out his memories on-line at Electrofunk roots, there are so many great tracks listed and many of them fit in the dub disco manor.

There are many other examples of dub disco, Atmosfear “Dancing in Outer Space” and Patrick Cowleys pre Sylvester work among them.

Reggae bands who had so inspired the scene also got into the spacey disco funk sounds themselves, Monkaya “Go Deh Yaka”, Chalice “Funky Kind of Reggae” and UB40’s excellent B sides “Mek Ya Rock” and “Nkomo A Gogo” are brilliant examples.

As in the late 60’s/early 70’s the late 70’s and early 80’s was a time of real music openness for bands to take in wide musical influences and make more exciting music because of it. A friend Stewart who had the Jesus and Mary Chain as his neighbours in East Kilbride and played in a band at the time said, “the record labels were following the bands as the 80’s went on they took control”.

In America, Chris Stein and friends from Blondie made provided a very dubby and funky backing for New York’s rappers in the 1983 movie Wildstyle soundtrack. There is an excellent release as the early rappers are awesome, there is also a release just with the music too.

Bands such as ESG a Bronx punk funk band with sometimes spacey leanings released “Moody” and “Ufo”, Mark Kamin’s who helped introduce Madonna to the world did very spaced out mixes on Affinity’s “Don’t go away” and UK funksters, Quando Quando “Love Tempo”.

I used to think of Modern Romance as a more poppy, blond with highlights version of Duran Duran. On hearing their first album and their incredible Salsa Rappsody mix of Everybody Salsa I definitely changed my opinion. This track was on the B side and was widely played on the New York club scene.

The last band from the alternative rock scene to really take to this sound was The Clash, they were a band that really experimented with many styles of music, punk, funk, reggae and even folk on Sandinista. Mick Jones was really into the New York hip hop scene but they were all very open minded musically. Slated by some of the London music press as a disco sell out at the time, history will have recorded who was right. This song to me captures the best of them, funky, dubby, punk rawness and fun.

The Clash – This is Radio Clash

The Clash with Rankin Roger – Rock the Casbah 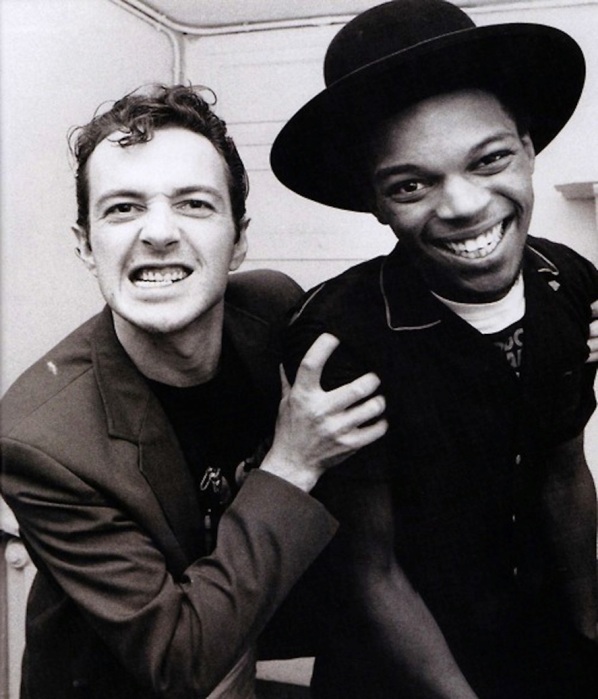 Summary of some great sounds!

The dub dance sounds spread across many genres in the early 80’s, though especially in the underground disco and garage scenes.

The music carried on throughout the 80’s though reducing as the years went on. Larry Levan’s second band Man Friday produced the dub disco classic “Love money, Love Heartache” in 1986, a time when commercial funk or soul had become often very overproduced and commercial sounding.

Mick Jones from The Clash’s new band Big Audio Dynamite mixed dance, rock and dub and later on bands like The Orb, Eat Static, Happy Mondays, Future Sound of London and Primal Scream on their Screamadelica album all added the dub to the dancefloor. 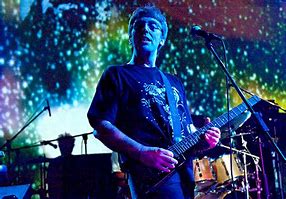 The Orb live with Steve Hillage from Gong

Don’t want to miss the next music club talk? Here are the upcoming dates!
It’s 4pm-4:45pm on a Friday, once a month.